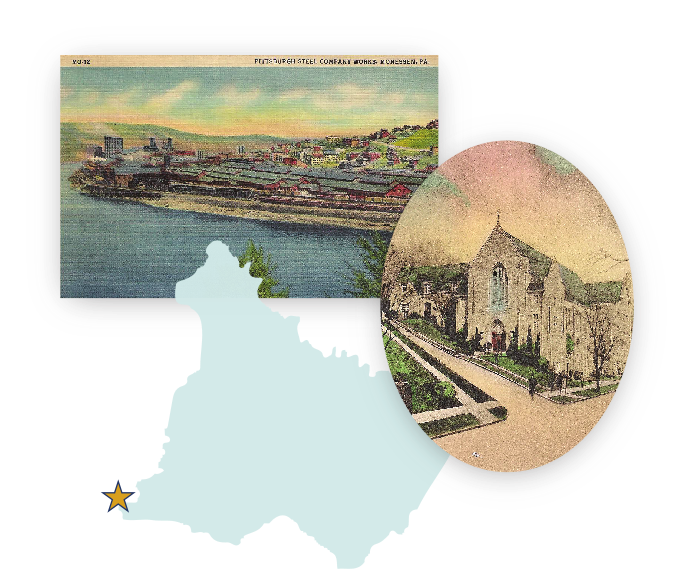 The land that would become the City of Monessen was surveyed in 1897 by H. Dallas McCabe, of Pittsburgh, through the East Side Land Company. The original plot of land consisted of eight farms and a winding country road lined with blackberry bushes; and was part of Rostraver Township. McCabe, along with Colonel James M. Schoonmaker and others, wanted to expand the Pittsburgh and Lake Erie (P&LE) Railroad south to reach coalfields in southern counties.

Schoonmaker formed a business deal with Indiana-based industrialist William H. Donner, who brought his American Tin Plate Company to Monessen. With that first mill, many people, businesses and industries began to move to Monessen. On September 3, 1898, the community became a Borough, and was officially founded, and named. The name “Monessen” was coined because the business leaders claimed that the new community would be a “New World Essen on the Monongahela”; combining “Mon” for the Monongahela River, and “Essen” for an industrial city in Germany.

The names of the founders are immortalized in many of the city’s streets – William Donner, James Schoonmaker, H. Sellers McKee, James H. Reed, Philander Knox, Alexander and Thomas McMahon, George B. Motheral, and George Nash. Two do not have streets named after them – McCabe, who laid out many of the original streets, and George O. Morgan, whose street, along with the entire neighborhood of Westgate was demolished in the name of ‘progress’ and ‘urban renewal’ in the mid-20th century. Much of that land is still undeveloped.

Throughout the early 20th century, Monessen grew in population, landmass, influence, and cultural importance. The city became a geographical center for the region, and a center for major events in in the early 20th century, such as the Women’s Suffrage Movement, the Labor Movement, Prohibition, and WWI and WWII era efforts. After growing exponentially in such a short time, and seeing the rise of many industries, the development of numerous neighborhoods, and the annexation of more land, Monessen was incorporated as a city. On September 21, 1921, Monessen became a Third Class City, under the leadership of Mayor Woodward.

By this point, the city had a multitude of nationalities and mirrored the ethnicities of the Pittsburgh region, and served as a microcosm of America as a whole. At its peak, the city had over 20,000 residents.

Throughout the 20th century, Monessen grew into an industrial, cultural, and political powerhouse. The city became home to hundreds of veterans, boasted thousands of middle class jobs, hosted Presidents, civic leaders, and celebrities. It also went down in infamy for its speakeasies, illegal gambling halls, racketeering, and nightlife. It was also home to dozens of churches and even more bars and ethnic clubs. The city was prosperous and lively.

In the late 20th Century, stability disappeared as the city’s buildings and infrastructure aged, and as jobs went away. As in many other Rust Belt towns, people moved away and the city struggled to find new industries.

Today, the city has about 7,600 residents, and the city has suffered from decades of disinvestment, but residents remain resilient. While we have many problems, our city is poised for growth in the coming years, based on the success of the rest of the region. We are continually striving to rebuild our city even better than it was before. Our best times are not behind us, but are yet to come.

“This is only the beginning of the City of Monessen, where there are many things yet to be accomplished. With God’s help and the continued cooperation of all the people, we will finish the job, and Monessen will be a better place in which to live, work, and prosper.”  – Mayor Hugo Parente.

“The City of Monessen’s goal is to improve the overall quality of life for the residents of the city, by creating opportunities for investment, community and economic development, placemaking, tourism, innovation, and business. We are also striving to attract new residents and businesses to our city, and show them that it is a wonderful place to live. We are working to revitalizing our city and explore innovative new ways to address longstanding issues, tackle decades of disinvestment, improve our Downtown District, and create a more welcoming, progressive, and functional local government. We hope you’ll join us, as we rebuild our city.”

Regular Meeting, Jan. 12, 2021 7pm. Closed to the Public due to COVID. Submit public comment prior to 4pm on Jan 12th. Agenda found here.

Regular Meeting, Jan. 12, 2021 7pm. Closed to the Public due to COVID. Submit public comment prior to 4pm on Jan 12th. Agenda found here.