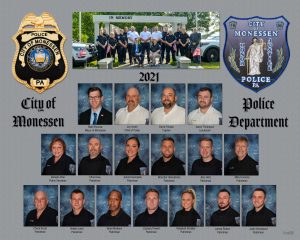 The City of Monessen Police Department was formed in 1897, in order to protect the residents of the newly formed settlement, which would become the Borough of Monessen in 1898, and the City of Monessen in 1921. The City’s first police Chief was D.W. Cooper, and he was assisted by James Laird and Ewing L. Woolsey. Monessen’s first Police Officers patrolled on foot and by horse. Today, we have modern patrol cars, two of which are environmentally friendly, hybrid models. The first Monessen Police Station was located at 4th and Donner Avenue, in the City’s first Borough Building. Before the construction of the Borough Building in the early 1900s, City offices were held at the Louttit Building at 8th and Donner Ave. The Police Department moved to the Monessen City Hall at 3rd and Donner in 1927 and was headquartered there until 2012, when it moved to its present location at the new Monessen Public Safety Building, across the street. Our police department has been protecting residents for nearly 125 years.